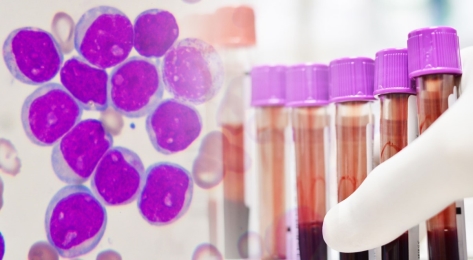 Lymphoma is the name for a group of blood cancers that reside in the lymphatic system. The lymphatic system is an important part of the immune system which helps to protect our bodies from infection and disease - it includes the spleen, thymus, lymph nodes and lymph channels, as well as the tonsils and adenoids. Lymphocytes mature into fully functional cells in the lymph nodes that fight infection. In lymphoma abnormal lymphocytes multiply and accumulate in the lymph nodes and other tissues over time. These cancerous cells cannot fight infection and thus impair the immune system. The two main types of lymphoma are Hodgkin lymphoma and non-Hodgkin lymphoma (NHL)

Non-Hodgkin lymphoma(NHL): most lymphomas are NHL. An average of 660 cases of NHL are diagnosed per year in Ireland and it represents 43% of all blood cancers. It’s more common in older people; 60% of people diagnosed with NHL are over 65.  In healthy people old lymphocytes die and are replaced by new ones, but in NHL the old lymphocytes don’t die but continue to grow and divide leading to excessive numbers of lymphocytes that crowd into the lymph nodes and cause them to swell. In our bodies there are two types of lymphoid cell – T-cells and B-cells. B cells fight infection by producing antibodies. Most non-Hodgkin's lymphoma arises from B cells. The main subtypes of non-Hodgkin's lymphoma include diffuse large B-cell lymphoma, follicular lymphoma, mantle cell lymphoma and Burkitt’s lymphoma. NHL can also be caused by abnormal T cells although this is less common. T cells are involved in killing foreign invaders directly. Subtypes of non-Hodgkin's lymphoma that are derived from T cells include peripheral T-cell lymphoma and cutaneous T-cell lymphoma. The origin (T or B cell) of the non-Hodgkin's lymphoma helps to determine the treatment options.